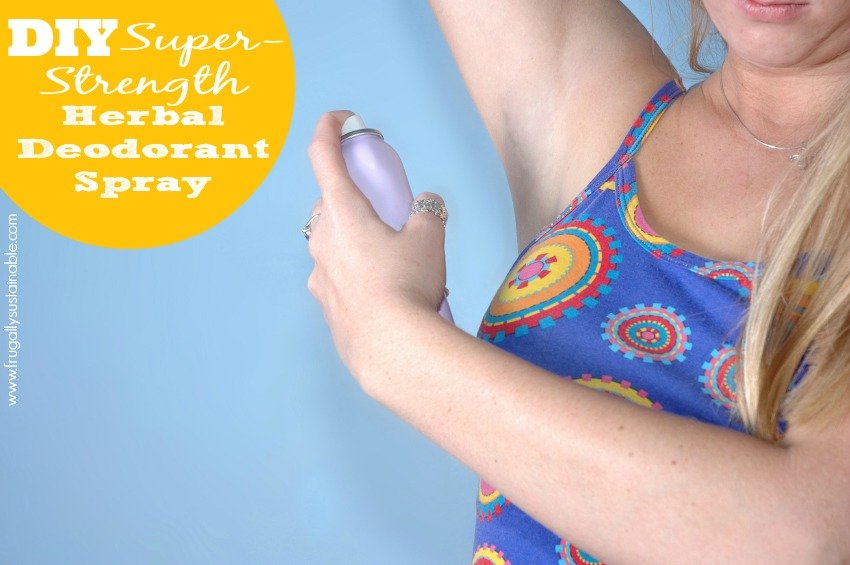 Did you know that the majority of breast cancer can be linked to the use of conventional deodorants/antiperspirants (along with many other hormonal and environment factors)?

All of the chemicals in conventional deodorants serve to kill or inhibit the growth of “bad” or undesirable bacteria that cause unwanted natural scent. Meanwhile, they kill the “good bacteria” too…leaving our bodies defenseless.

There are many reasons why we should be concerned about using antiperspirants and commercially prepared deodorants!

Here are just a few:

Fortunately, you can make your own deodorant for almost nothing in just a few minutes, and it WORKS!

The ingredients used to make this Super Strength Herbal Deodorant Spray are both astringent and antimicrobial. Standing the true test of farm chores, cooking over a hot stove, and working until the wee hours of the morning.

This stuff keeps me feeling fresh all day!

And I happen to think it’s AMAZING!

Base Ingredients
*Use local, organic ingredients whenever possible.

Add all ingredients to a 2 ounce mister bottle. Shake well. Apply to underarms as often as needed.

I love these 2 oz amber boston round glass bottle with a fine mist sprayer. They come in a pack of 6 — perfect for sharing or keeping one at home, work, or in your workout bag!

Using the “Base Ingredients” list as a guide allows you the creative freedom to use the items you have on hand to make something beautiful.

Here are a few examples of flower water (hydrosol) and essential oil combinations I love:

Where Can I Get This Stuff

–Mountain Rose Herbs…they have everything you’ll need by way of Bulk Herbs and Natural Products for Healthy, Natural Living! It’s your one-stop-shop!

Through my studies at the Herbal Academy of New England, I am learning that health doesn’t come from plastic bottles. Vitality grows naturally from the way you live your life. If you want to learn more about herbs as medicine and as food, and if you’re just too busy to enroll in an in-person program, join ME and others from around the world at the Herbal Academy of New England for a comprehensive and convenient online herbal course you can complete anywhere and anytime!