You are here: Home » Natural Living » The Last Pilgrims 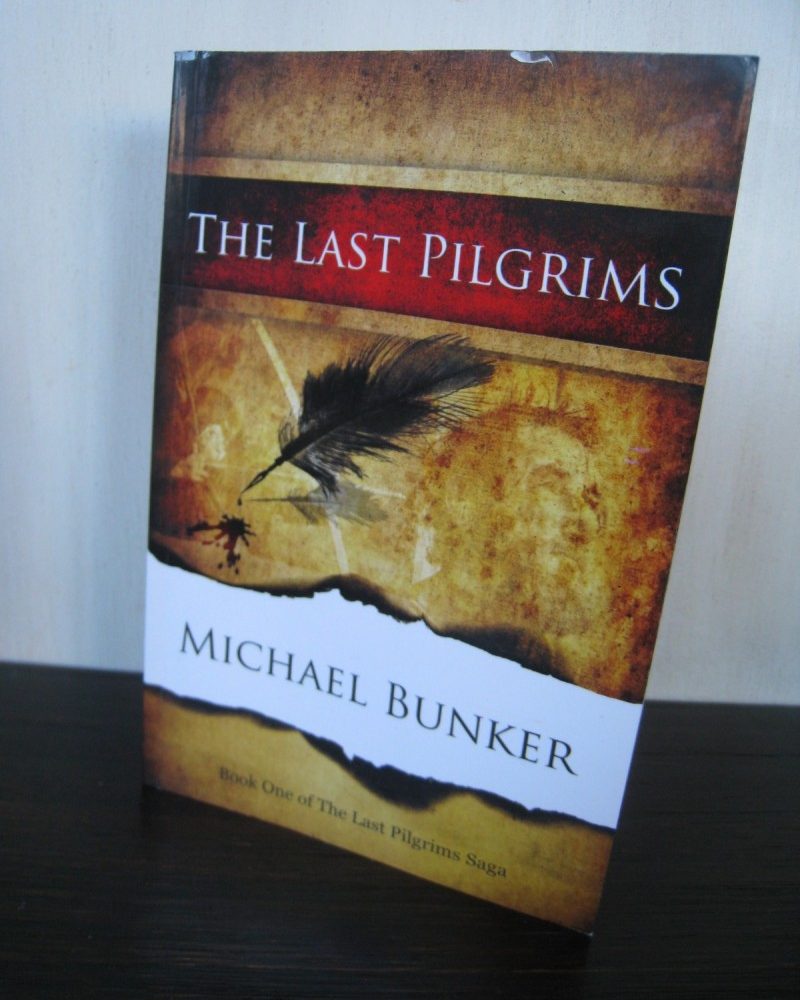 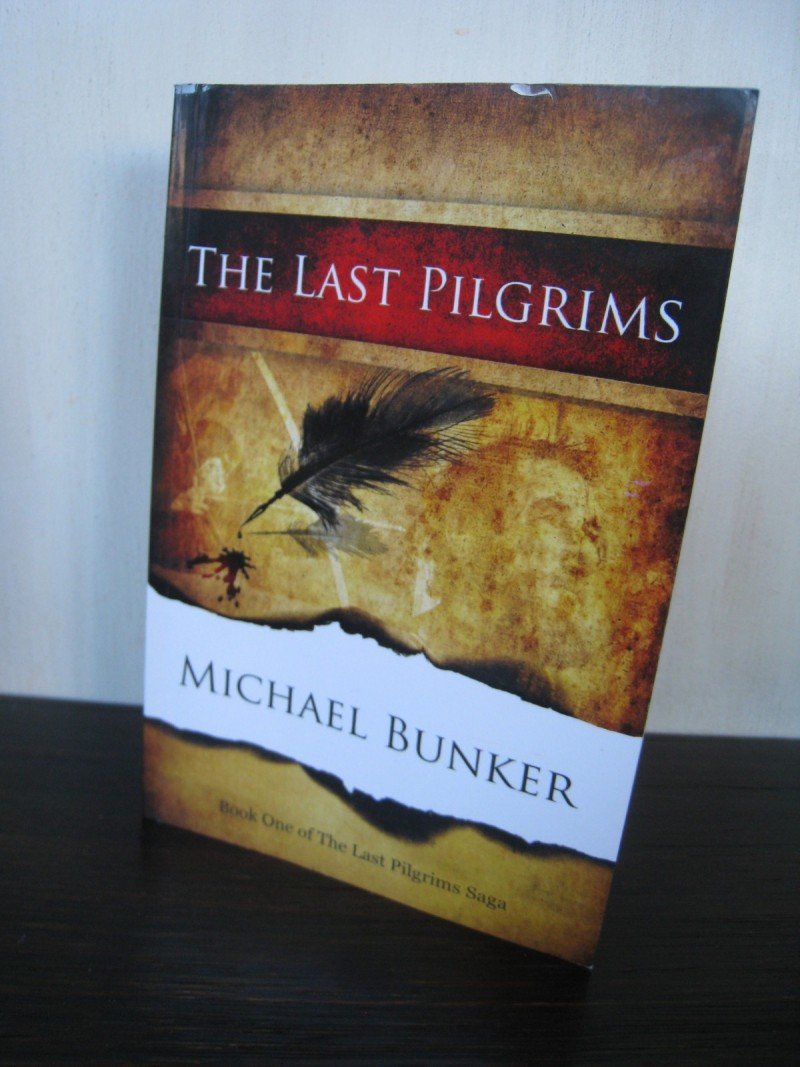 [T]here are those moments in our lives when everything changes and we know we’ll never be the same — without a doubt one of those moments for me happened after reading Surviving Off Off-Grid, by Michael Bunker. Unlike any other book on the subject, the historical facts laid out in the book combined with a Biblical perspective and practical tips for off-grid living, all worked together to transform my thinking in a powerful way.

Then I was given the wonderful opportunity to read Michael’s newest work, The Last Pilgrims, a captivating fictional, post-apocalyptic novel.

The Last Pilgrims creates an illusion of our world twenty years after a complete societal collapse that has resulted in massive loss of life and the end to life as we know it. The story follows a small remaining group of “plain” people, the Vallenses, who live and thrive in an Agrarian community in what was once Central Texas.

The story is fascinating. I could see, smell, taste, and hear it all! The anticipation of reading the next page made The Last Pilgrims a book I simply couldn’t put down!

Most importantly, I fell in love with the characters.

I identified on many levels with Ana. When reading her story in Chapter 11, I literally found myself fighting back tears and emotion. Her’s is the story of so many women — quietly believing the truth while gently and lovingly trying to help her husband understand — she is filled with grace and gratitude. When we meet her she in the field harvesting wheat…recounting the events of her life over the last few years during and after the collapse. 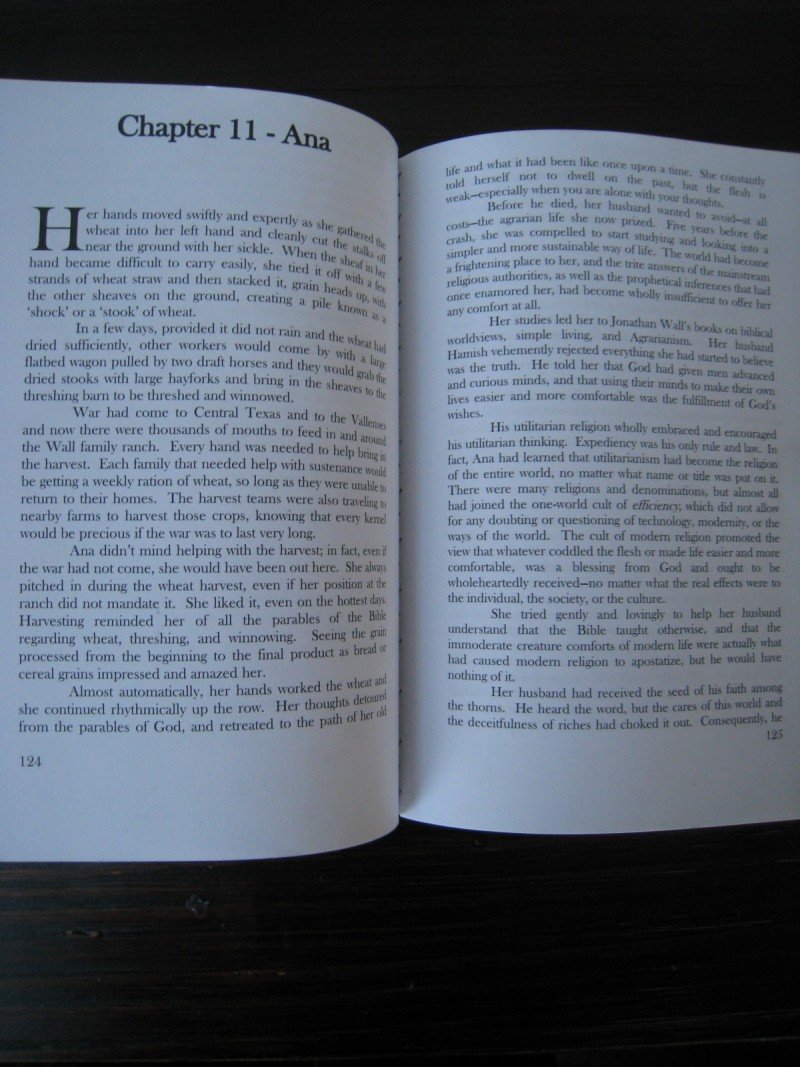 I want to share with you a small excerpt of the chapter:

Almost automatically, her hands worked the wheat and she continued rhythmically up the row. Her thoughts detoured from the parables of God, and retreated to the path of her old life and what it had been like once upon a time. She constantly told herself not to dwell on the past, but the flesh is weak — especially when you are alone with your thoughts.

Before he died, her husband wanted to avoid — at all costs — the agrarian life she now prized. Five years before the crash, she was compelled to start studying and looking into a simpler and more sustainable way of life. The world had become a frightening place to her, and the trite answers of the mainstream religious authorities, as well as the prophetical inferences that had once enamored her, had become wholly insufficient to offer her any comfort at all.

Her studies led her to Jonathan Wall’s books on biblical worldviews, simple living, and Agrarianism. Her husband Hamish vehemently rejected everything she had started to believe was the truth…

…She tried gently and lovingly to help her husband understand that the Bible Taught otherwise, and that the immoderate creature comforts of modern life were actually what had caused modern religion to apostatize, but he would have nothing of it…

…Consequently, he banned her from reading anything Jonathan Wall wrote and forced her to continue in, and increase her dependence on, a modern world rocketing towards collapse. The more the world stumbled and reeled from gluttony, greed, and consumption, the more Hamish insisted that everything was just fine, and the angrier he became with anyone who even hinted at abandoning  the sinking ship…

…When the crash came, Ana and Hamish were two of the very, very few people who made it out of Fort Worth. How many coincidences could there be? They just happened to have a half-tank of gas; and they just happened to choose a route out of town that hadn’t already been closed off by the police, burning cars, rioters, or looters, or all of the above. They managed to make it two hours west of the city before the worst of the violence and mayhem consumed most of those who were left behind.

Today Friday February 24, 2012 the author has organized a “book bomb” and shared instructions here. Basically, when a lot of people buy the book all in one day the rankings on book will dramatically increase.

This is an independently published book. No big company backing these guys! We are the “company” 🙂 If you are able and interested…purchase today and be apart of something really great!

Thank you to everyone who entered the contest for the FREE copy of The Last Pilgrims and the Kindle Touch! The winner is…Tabitha E. Congratulations!!! We’ll be in touch with you soon 🙂

What about The Last Pilgrims and living off-grid spikes your interest?